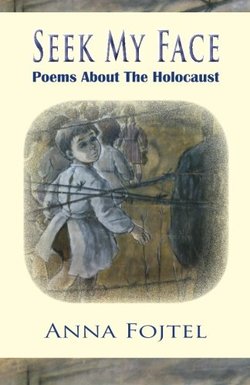 Anna Fojtel’s collection Seek My Face: Poems About The Holocaust marks the arrival of a highly original new voice in what might be called the poetry of post-memory. These poems show us the pressure of the past on the present in the form of unforgettable imagery. Holocaust, it is a word that comes from the Greek, to silence by fire. It is a word to mourn with, to weep with, to pray with. These poems carry a message to call an end to murder and genocide, senseless hatred and violence. Not to be silenced.
Listen To Anna Read A Poem From The Book. Music by Lewis Nitikman.
About The Author

Anna Fojtel was born and grew up in Poland. She moved to England in 2004. In 2012 she completed her BA in Creative Writing at Sheffield Hallam University and then studied for an MA in Literature at the University of Sheffield. In 2013 she published her debut anthology Nagi Jezyk with Nowy Swiat in Warsaw. Seek My Face is her second collection and the first written in English. Fojtel’s urge to pay poetical tribute to the Holocaust victims emerged while she was tracing her family history, and also matured her decision to convert to Judaism.